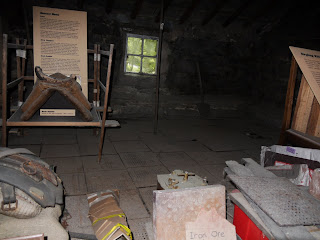 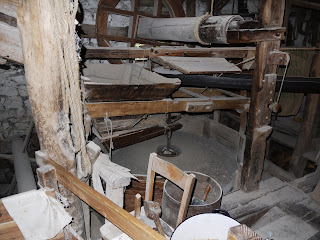 The stone and grain feed

Today Bob and Glenis, Richard and Sylvia joined about a dozen other members of the North West Mills Group in a visit to Eskdale Mill, Boot and Muncaster Mill. There was also a nice ride on La'al Ratty (The Ravenglass & Eskdale Railway) between the two mills. 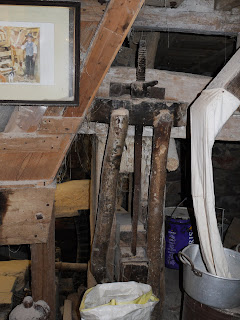 The tentering at Eskdale mill

At Eskdale Dave King, the miller, very helpfully showed us round and described some of the amazing collection of antiquities on display - more a folk museum than just a mill! The mill technology seems truly ancient, for example, the tentering method being completely different from what we have at Acorn Bank. The stone bearing is supported on the centre of a large beam, which is supported at one end on the centre of another beam, one end of which is controlled by the tentering adjustment. The stone nut is driven directly from the pit wheel, there being no wallower or spur wheel. 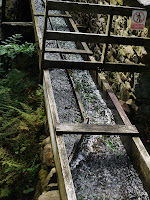 The divided launder
This mill is open to the public and has its own website, www.eskdalemill.co.uk/. Both the mills we visited have intact drying kiln floors, something of which we were very envious.
We were also interested in the way the water flow in the launder was split between the two wheels, as this was similar to the way we imagined it must have happened at Acorn Bank. This might become important if we ever get round to restoring our second wheel. 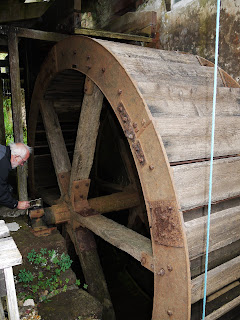 Richard inspects the bearings
at Muncaster
After a pleasant ride on the railway in the sunshine down to Muncaster, Bob and Christine Hoye-Turner, the owners of Muncaster Mill, made us very welcome. The mill is not normally open to the public these days, as it is their home, but they are prepared to show interested pre-booked groups round. I recall visiting it from the railway and buying flour 20-odd years ago. Bob is committed to not harming the historic mill machinery, but it was sad to see it lying idle, and one cannot help but worry for its future. Again we were shown round the mill, and were treated to a splendid spread of tea and cakes made by Christine.

By the time we got on the train back to Boot, it was raining so the journey was less pleasant! However, overall an interesting and enjoyable day - thanks to Margaret Croker who organised it on behalf of NWMG, to Dave King, and to the Hoye-Turners.
Posted by Bob Price at 10:28