Today we dismantled the drive to the No 1 shelling stone as the first stage in repairing the stone nut to make it run true. At present it is worn, and so will not sit level on its taper, leading to its damaging the cogs on the spur wheel. As we have dismantled this stone before we felt we probably knew what we were doing! 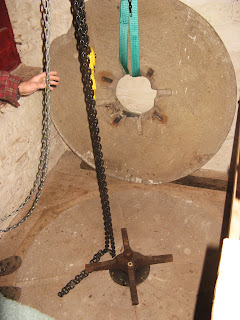 The stone lifted before
removing the rhynd

The first step was to lift the runner stone using a chain block suspended from a beam directly above the centre. We first lifted the tentering beam using a car jack so that we could post a strap from the edge to the eye of the stone. We then used a second, smaller, block to pull the stone back towards the wall. We propped it against the wall, where it was very stable; however we left a chain block attached as a "belt and braces". 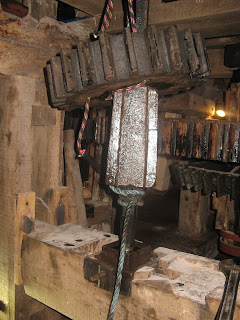 The stone nut separately supported
Then we removed the rhynd, bearing top cover plate and bearing bottom adjusting plate and drove the wooden bearings out downwards. We tied the stone nut to screws in the bearing using rope, and fixed another rope between a chain block and the stone spindle.With the tentering beam fully lowered and the bottom bearing box removed, we were able to lower the stone spindle out of the stone and take it to the workshop, followed by the stone nut. We removed the wedges and took the taper off the spindle. We now need to measure up carefully and have the 2 discs made to sit the stone nut firmly on the taper.
Posted by Bob Price at 22:06