How heavy is the axletree exactly? 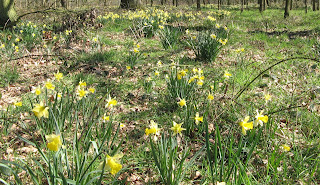 Aren't the daffodils lovely?
The main task today was to continue trying to sort out the loose bearing due to timber shrinkage on the end of the axletree. Martin Watts has recommended that we should use a number of very thin oak wedges. Richard reckoned that it would be easier to make sure the pintle stays centred if we either took the load off it, or drove in 9 or 10mm metal bars first and then wedged around them.

We therefore tried again to lift the indoor end of the axletree. This time we used 2 3-tonne chain blocks each with appropriate straps, each attached to a separate oak beam. Bob pulled on the two blocks simultaneously and monitored the tension in the chains, Richard watched the pintle and Ray watched the two beams. Eventually it was Ray who called that the narrower beam was bending. The pintle hadn't moved and the lifting chains were as stiff as steel bars. Given that we were lifting at one end of the axle, we should have been able to lift a distributed load of 12 tonnes, unless something was jammed. What is going on? 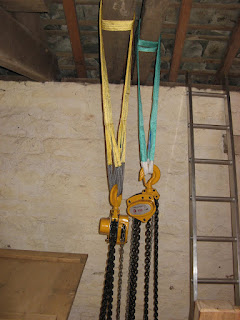 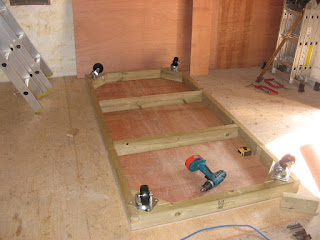