Tidying up and getting ready to mill 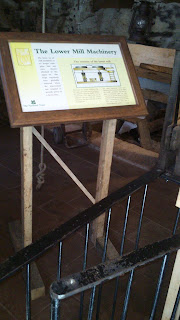 A full house today, Richard, Ray, Bob, George, Mike and Peter. Between us we tackled some finishing-off jobs.

The information board explaining the Lower Mill Machinery had fallen off the fence and needed to be re-displayed.  We had been thinking for some time that it was in the wrong place, as visitors saw it on entering the mill and thought it referred to the main machinery.  Ray and Bob decided to make a stand for it so it would be more relevant.

They then went on to repair part of the fence on the viewing platform. 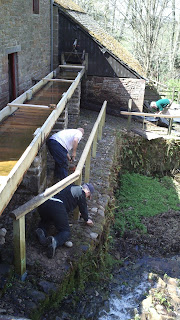 George and Mike carried on pointing and replacing the cobbles where we had inserted the new fence above the spillway pit.  In the previous couple of weeks when I wasn't there, the volunteers built a new trough to catch the water spilling from the dump valve.  Peter can be seen here extending and lining it.

Richard meanwhile got the machinery set up and ready to start milling. At the end of the afternoon the year's first delivery of wheat arrived and had to be manhandled across the yard and upstairs.  Not good for the back - we must get the sack hoist working. 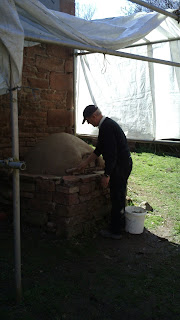 We also put the cob oven back into some kind of usable state.  We had rather neglected it, because it would have had to be rebuilt when the barn was restored, but that project has been held up by the possibility of bats.  We cleaned it up, fitted a new tarpaulin and George skinned the outer surface with fresh lime mortar.
Posted by Bob Price at 20:10