Tidying up the launder area 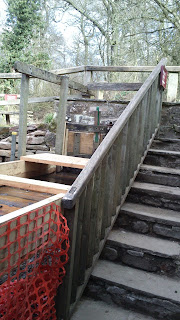 The launder has gone together slightly different that the previous version, so we have had to make one or two adaptations, including to the gate valve.

We have now finished the work on the launder, apart from the pointing (which we still can't do as the weather remains stubbornly below the required 5 degrees) and stopping up one or two leaks (also difficult at present temperatures).  It has been the coldest March for 66 years, apparently.

We therefore began tidying up by removing a lot of the rubble, sacks and bags we had been using or had left about. We also began to replace and repair the fencing.  As you can see, the section of fence alongside the steps is now back in place, as is the guard rail for the gate valve adjusting platform and part of the temporary fence has been removed.
Posted by Bob Price at 14:04