At last, after 4 years of work, we finally milled!

This was the first time since at least 1940 the mill has produced flour. 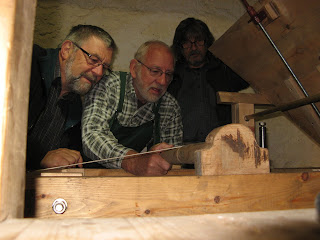 We make the final adjustments...

We arrived early to make sure all was well, and made a few minor changes and adjustments. Nick Jones, from Little Salkeld watermill, arrived with two sacks each containing 25kg of grain. After a few further checks, he took us through the process of starting up for the first time. A lot to learn, from how to untie the paper sacks easily rather than fighting them, to balancing wheel speed and grain flow rate to get a good product. 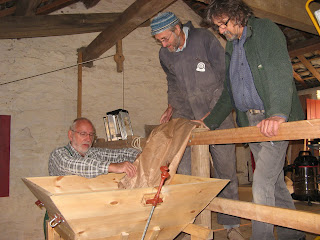 ...before Nick Jones arrives
to fill the grain hopper

In the event the product was proclaimed to be good and the whole thing worked smoothly, surprisingly so for a first run. We had a small celebration and carried on milling for a couple of hours. Nick reckoned the system could be run faster to increase output, but that isn't really a problem for us, we don't want tons of the stuff!

The short video shows some of the bits of the process in action, with nice mechanical sounds.
Posted by Bob Price at 17:52