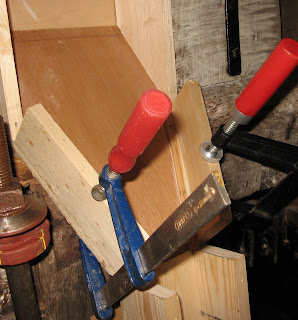 The flour chute, showing the rectangular side pieces
and tricky 3-D triangular spaces
Today Ray and Bob continued to work on the flour chute. Ray brought the final output tube which he had built at home, and we mounted that on its brackets. It then remained to build the side pieces to bridge the gap between that and the upper part that is built into the hurst frame. Unfortunately, the sides would have to be cut with angles in 3 dimensions, and even then it began to look as though they might have to be bent! After several cardboard templates and much head-scratching we went for coffee.

The coffee seems to have done the trick, as we then worked out that we could fit rectangular pieces to the sloping part of the chute, and make simpler triangular pieces to join them to the upper and lower parts. 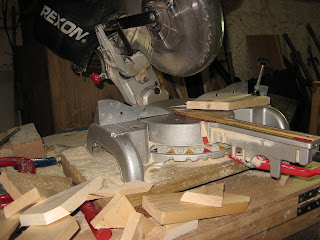 The saw and the failed triangles

Ray's compound mitre saw managed to cut the first three triangular pieces, which have one edge at an angle other than 90 degrees to the flat surface as well as a 38 degree point angle. However, the fourth seemed to require a combination of angles and directions that the saw didn't want to accomodate. Finally, after many unsuccessful attempts, we made a jig to hold the wood at 45 degrees to the saw bed and finally glued the last piece in place. 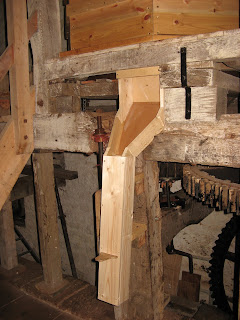 All we need now is the front cover
Posted by Bob Price at 17:24