Just three of us again today - Richard, Mike and Bob. 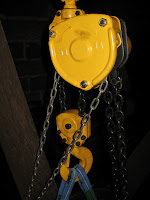 Richard wanted to overhaul the wet-side bearing of the main shaft, so he rigged up a 3-tonne chain lift and pulled. And pulled. And pulled. Surely it can't be that heavy? At last realisation dawned - the hook block had twisted 360 degrees between the chains - sort of up and over between the two chains connecting it to the main block. This put a twist in the chain which prevented it running into the block. This may account for the problems we had on March 27th (see blog for that date). 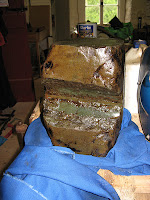 Once that had been sorted the shaft was easily lifted and the massive stone bearing block removed for cleaning.This photo shows it degreased - the recess that the bearing pintle runs in looks rough, but feels quite smooth. 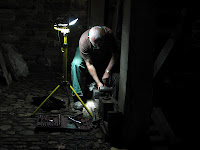 I had to include this nice Tolkien-ish picture of Richard working on the pintle... 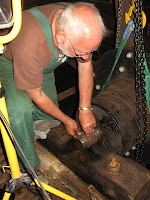 ...but you can see what he's doing better in this one.
Finally the bearing was re-greased and reassembled. 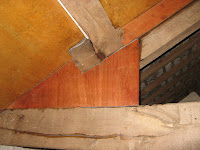 Apart from helping Richard as required, Bob and Mike finished the bagging area, fitting more plywood panels, sealing corners with beading, varnishing parts, and applying miles of antibacterial silicon sealant to the gaps and edges - and even the big crack in the roof truss..
Posted by Bob Price at 20:00 No comments: 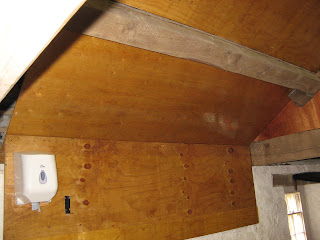 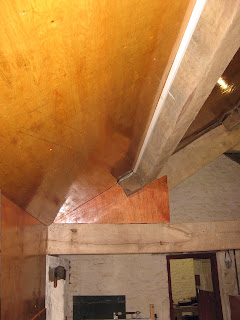 Just three of us today (Ray, Mike and Bob), so we carried on boarding the roof above the bagging area and the wall behind.  All the board has been varnished.

We also tidied the cables that cross the area by putting them in a length of plastic trunking.
Posted by Bob Price at 19:25 No comments:

Today George was filling some of the rather random holes in the masonry with wood, stone and lime mortar and Richard was working on the No 2 stone drive shaft (see later in this entry).  The rest of us made a start on the improvements required so we can bag flour in the mill. 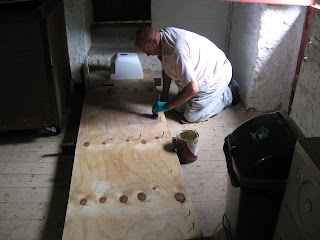 Ray removed the old back board from the wall and Mike cleaned it up and gave it a couple of coats of varnish. 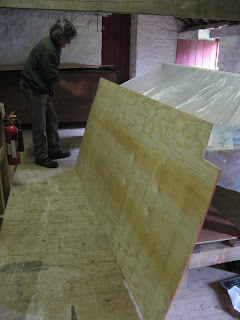 Meanwhile Ray and Bob measured and cut two plywood panels to board over the bare slates, and these too were given some varnish. They will be screwed to the rafters next week when the varnish is dry. 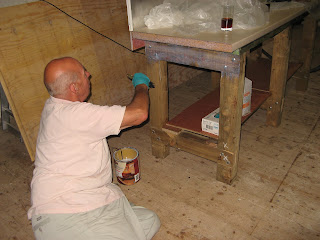 Mike went on to varnish the ends, legs and underside of the bagging bench. 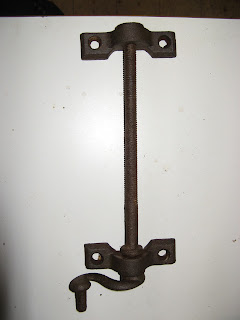 One of the other improvements listed last week was to the control that adjusts the angle of the shoe.  Bob found and removed this rather nice screw adjuster from the second, rather derelict, winnower.  Richard is going to adapt it to pulling the string. 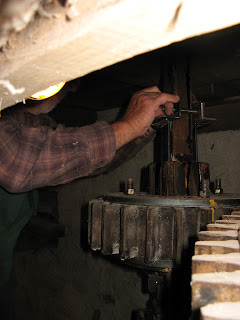 Finally, as mentioned above, Richard had made some brackets which he clamped to the No 2 stones drive shaft.  There are brackets clamped above and below the stone nut taper.  Those below are to prevent the wedges falling out, while those above are to stop the taper sliding up the shaft when the stone nut is raised - the nut is a very good fit on the taper and tends to bind.
Posted by Bob Price at 20:03 No comments:

Today the 5 mill volunteers were treated to a basic milling course, courtesy of Nick Jones, owner of and miller at Little Salkeld Watermill.

We spent the morning around Nick's mill, seeing how different bits of machinery operated, learning about the various grains and flours and seeing how they influenced the milling process.

At lunch time it was pouring with rain (see picture), but nonetheless we stood in what shelter we could find and ate delicious pizzas baked in their cob oven.

In the afternoon we travelled to Acorn Bank, first to have a photo taken by the man from the Cumberland and Westmorland Herald, then to start the mill and grind some flour. At first we could only mill fairly coarse meal, but this was probably due to feeding the grain too fast for the power available, which was limited by the delay between opening up the sluice and the extra water reaching the mill.

A number of improvements were suggested:
The other news of the day was that the inspector from Eden Council's public health department had visited and was happy about the milling process.  Unfortunately she was less happy with the bagging area - until some improvements are made bagging will have to be carried out in the tearoom kitchen, which introduces some logistical problems.  Specifically we are required to cover the bare roof slates over the bagging bench and seal all wooden parts in the area.