Moving the chicken hut and other stories 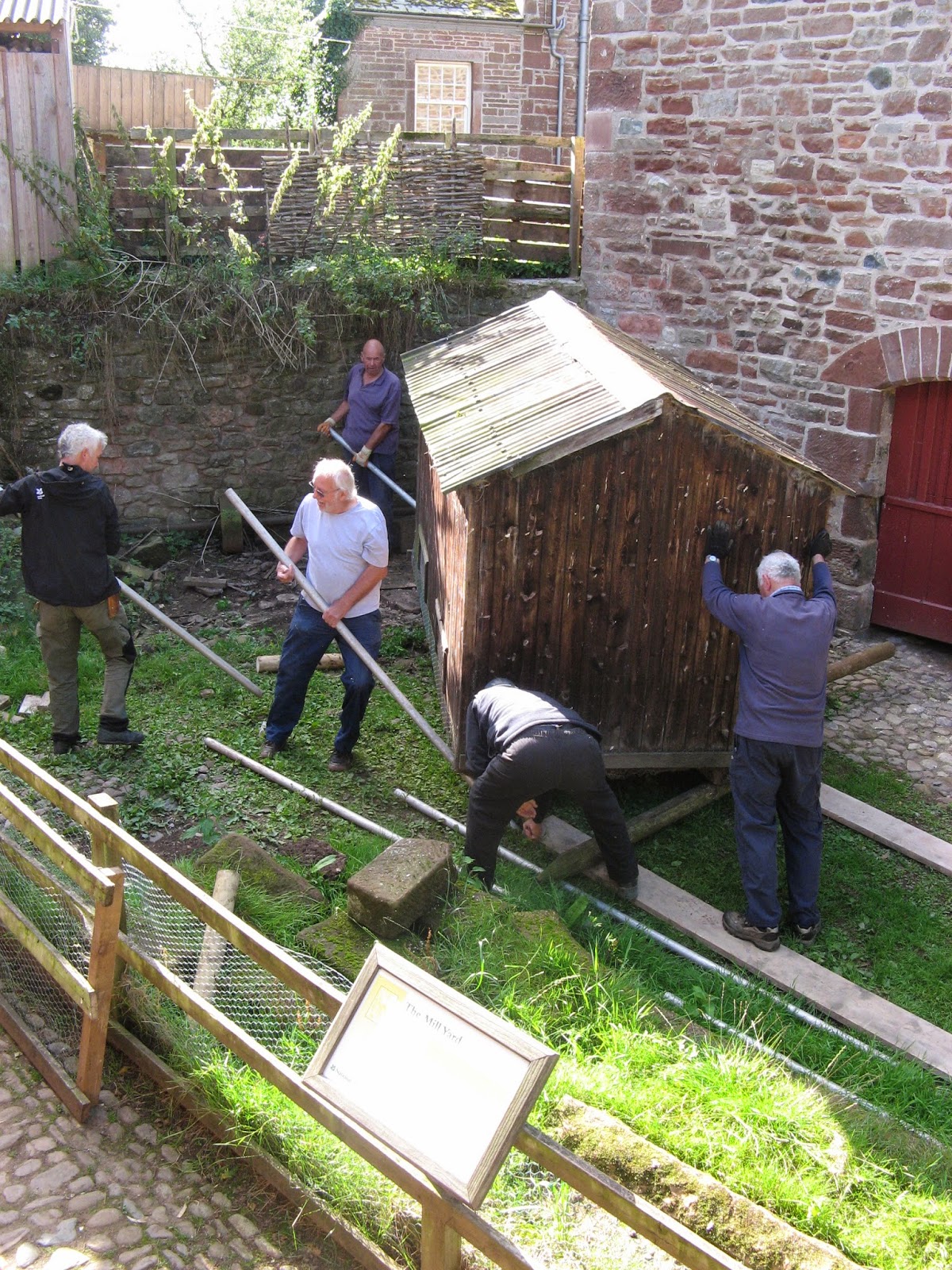 In order for the cobbling of the yard to proceed, we had to move the chicken shed from the top of the yard to the bottom.  Having pleaded a bad back, I was able to take pictures from the upstairs of the mill while Chris (the gardener), assisted by the mill and estate volunteers, used a system of planks and rollers to move the beast into its new position.  It seemed to be surprisingly heavy, even though all the chickens had been removed first!

The removal of the shed meant we could get at the old lay-shaft that had been trapped behind it.  This was not part of the mill machinery, but had been introduced.  Richard had an idea that we could use it to give a better idea of the mechanical arrangements in the saw-mill part of the mill.  To that end, he has started to dismantle it and shorten the shaft.  It is proposed to make dummy wooden bearings and a dummy gear wheel to sit on the outside end, where it would have met the gearing from the third waterwheel.

The evidence we have for the third wheel and its drive comes from some late 19th century photographs.  So that we could get a better idea of the arrangements, I decided to take a modern picture from a similar viewpoint.  This means the other side of Crowdundle Beck.  I first tried walking to it via the road, but after a 35 minute exploration, I decided I could not reach the river bank that way.  Later I set off to ford the river, armed only with a crudely cut stick and a pair of borrowed wellies.  This was more successful, though the trees and undergrowth have advanced a lot since the 1890s. 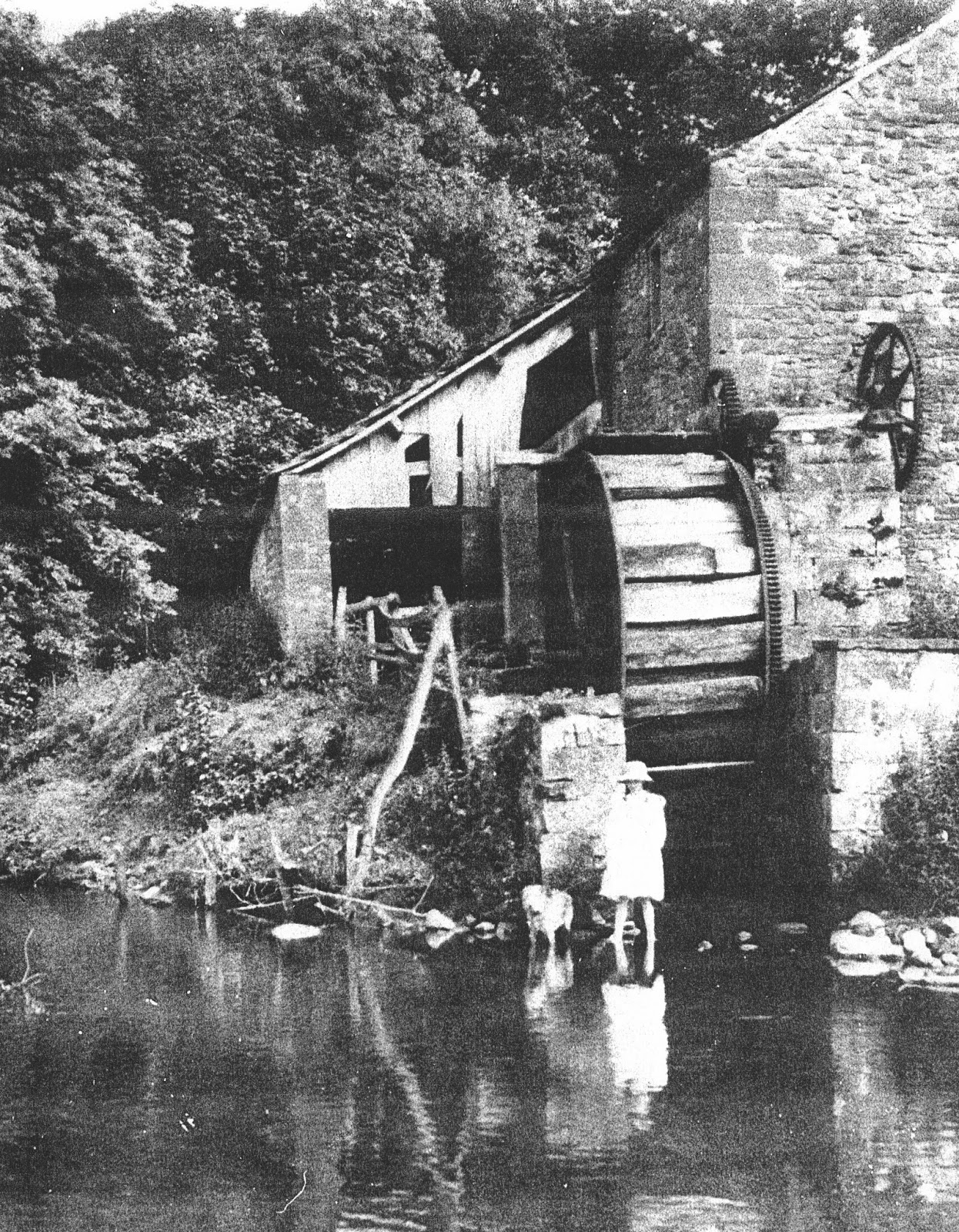 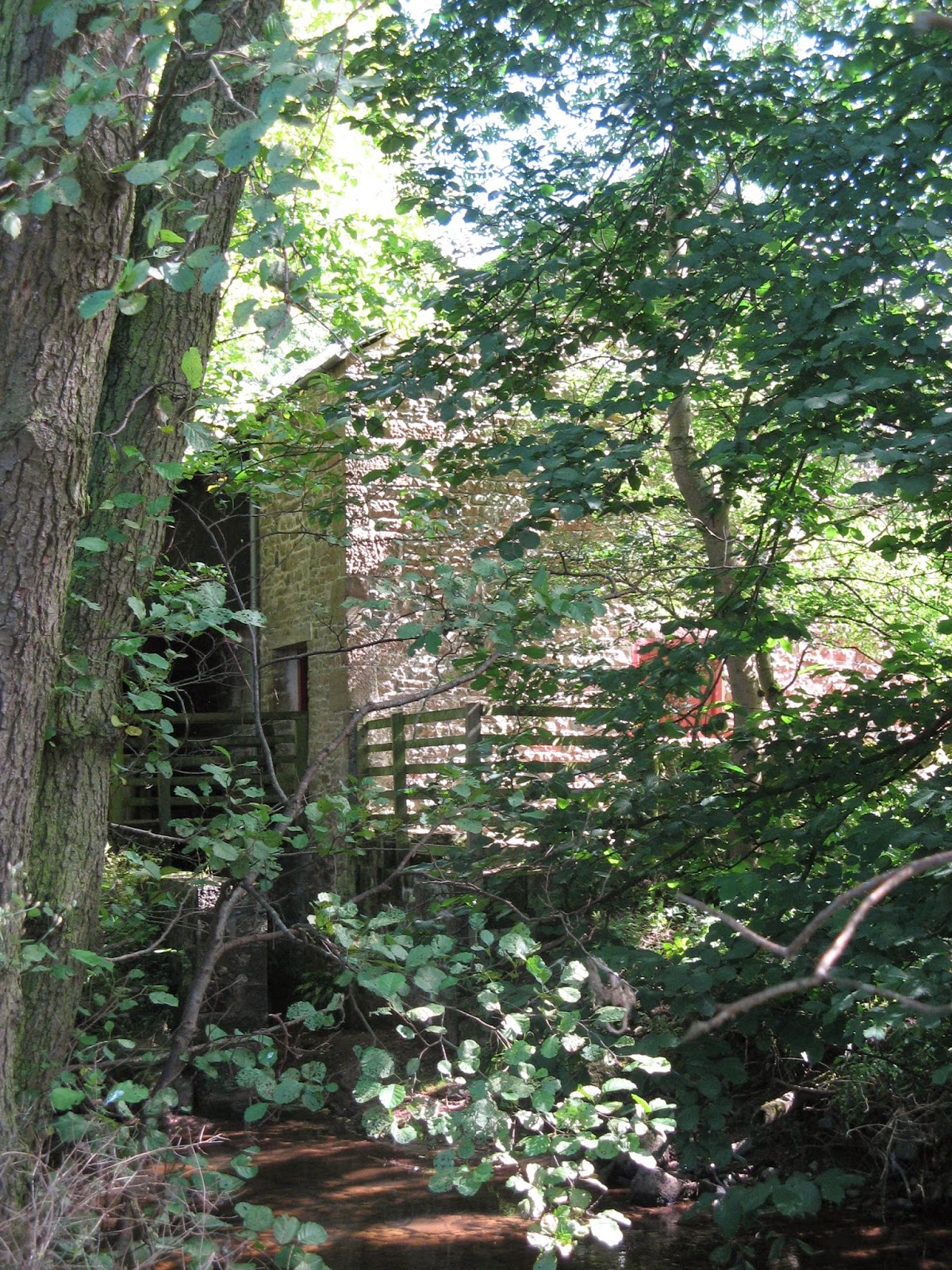 In other news, the timber and castors have arrived for the second grain storage bin, so Ray and Donald started work on that.

We'll always find another job to do...

Just recently we have:

Made changes to the milling machinery to reduce the chances of annoying wildlife, like mill moths, gaining access.  This includes taking the damsel out every time we finish milling and storing it in the hopper.  To facilitate this, we have changed the mounting of the upper bearing of the damsel shaft.

Made plans for a second grain bin and got the materials ordered.

Made no progress with the rebuilding of the kiln. 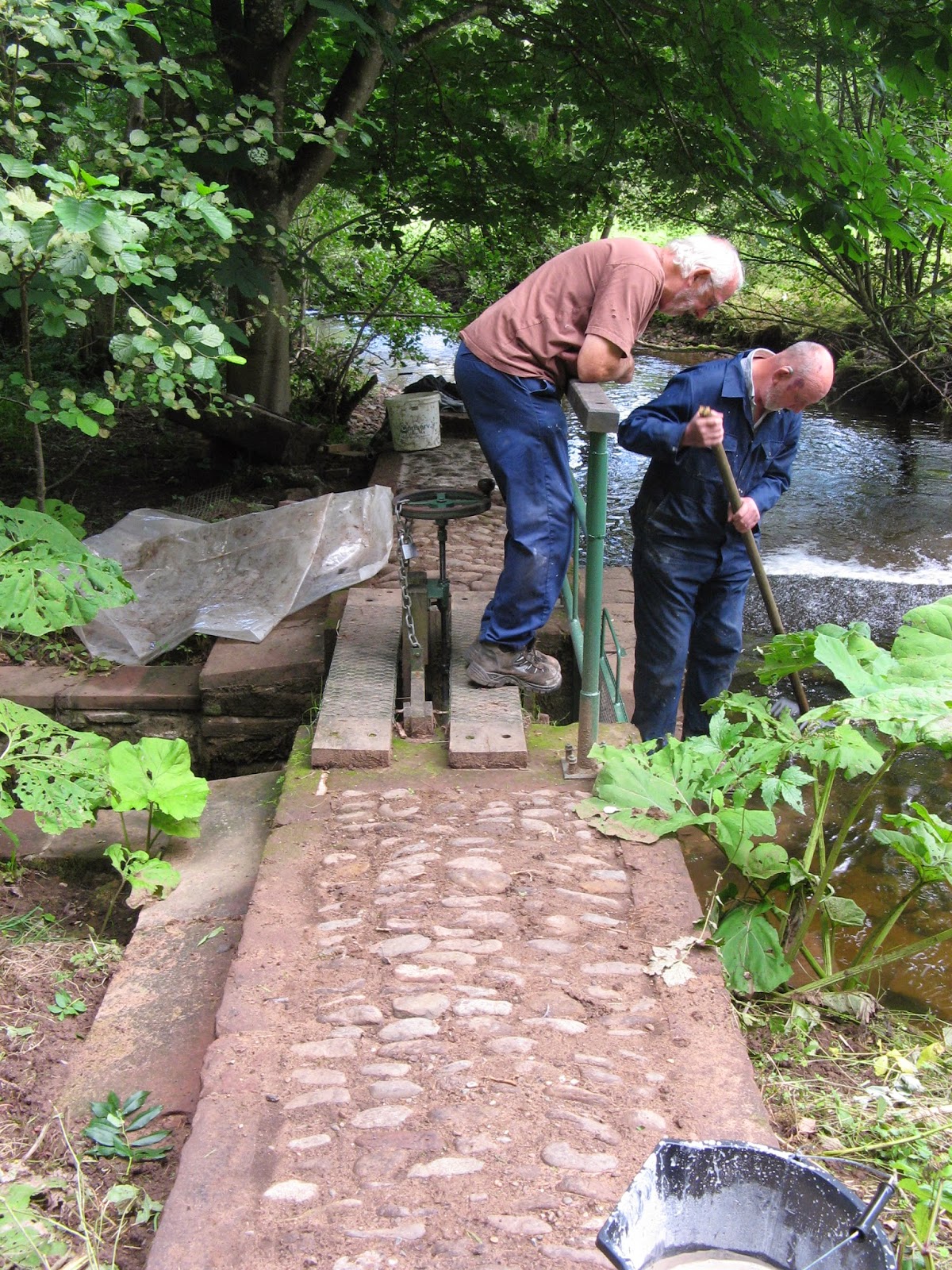 Begun to rebuild the retaining wall adjacent to the weir.  The river has undercut the wall (as it has the weir itself) and there was a danger the whole thing could collapse into the water.  The pictures show Richard and Donald moving some heavy masonry during week 2 of the work (I was there as well, but I was holding the camera!). 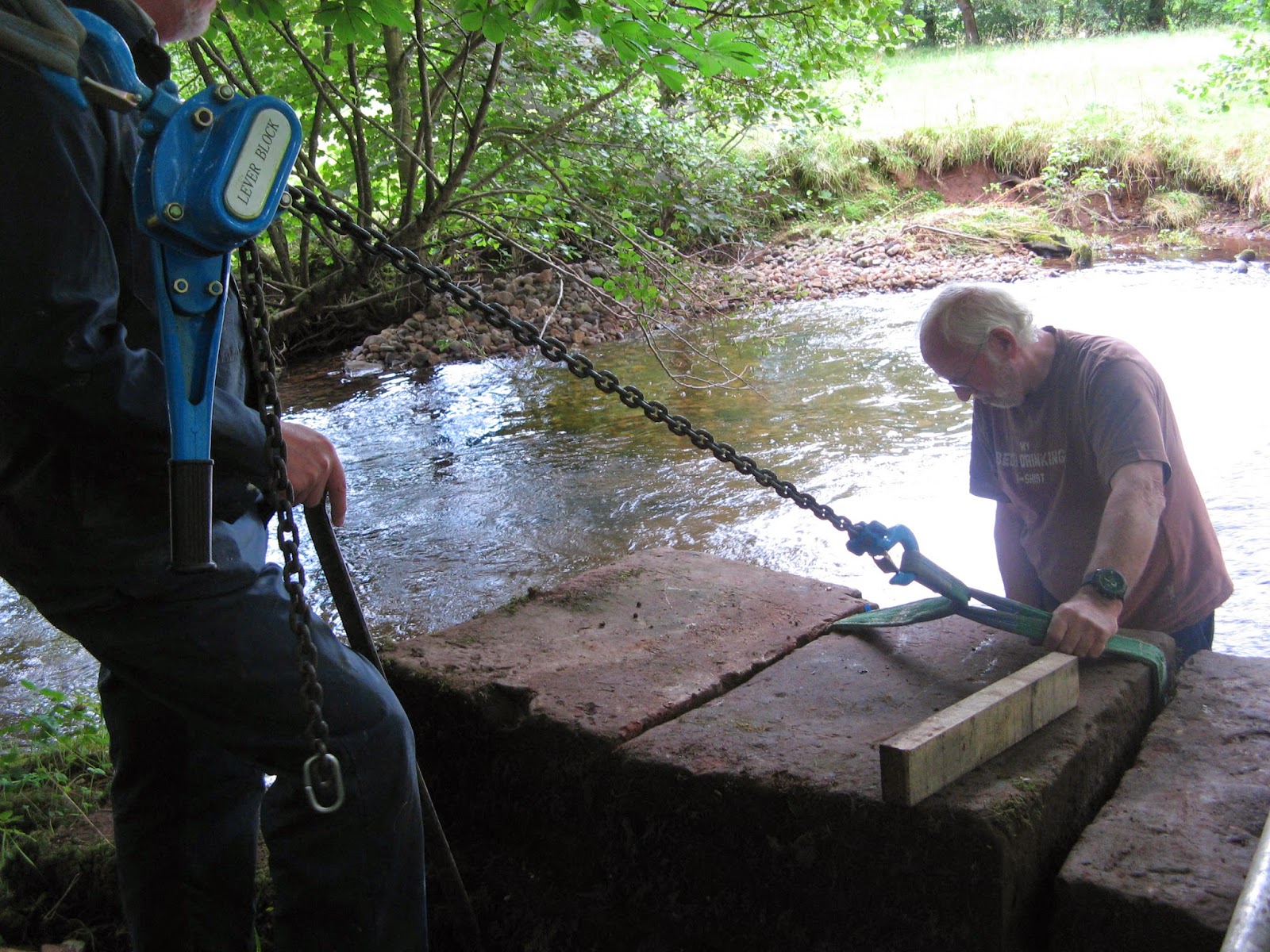 Nice day for a change! 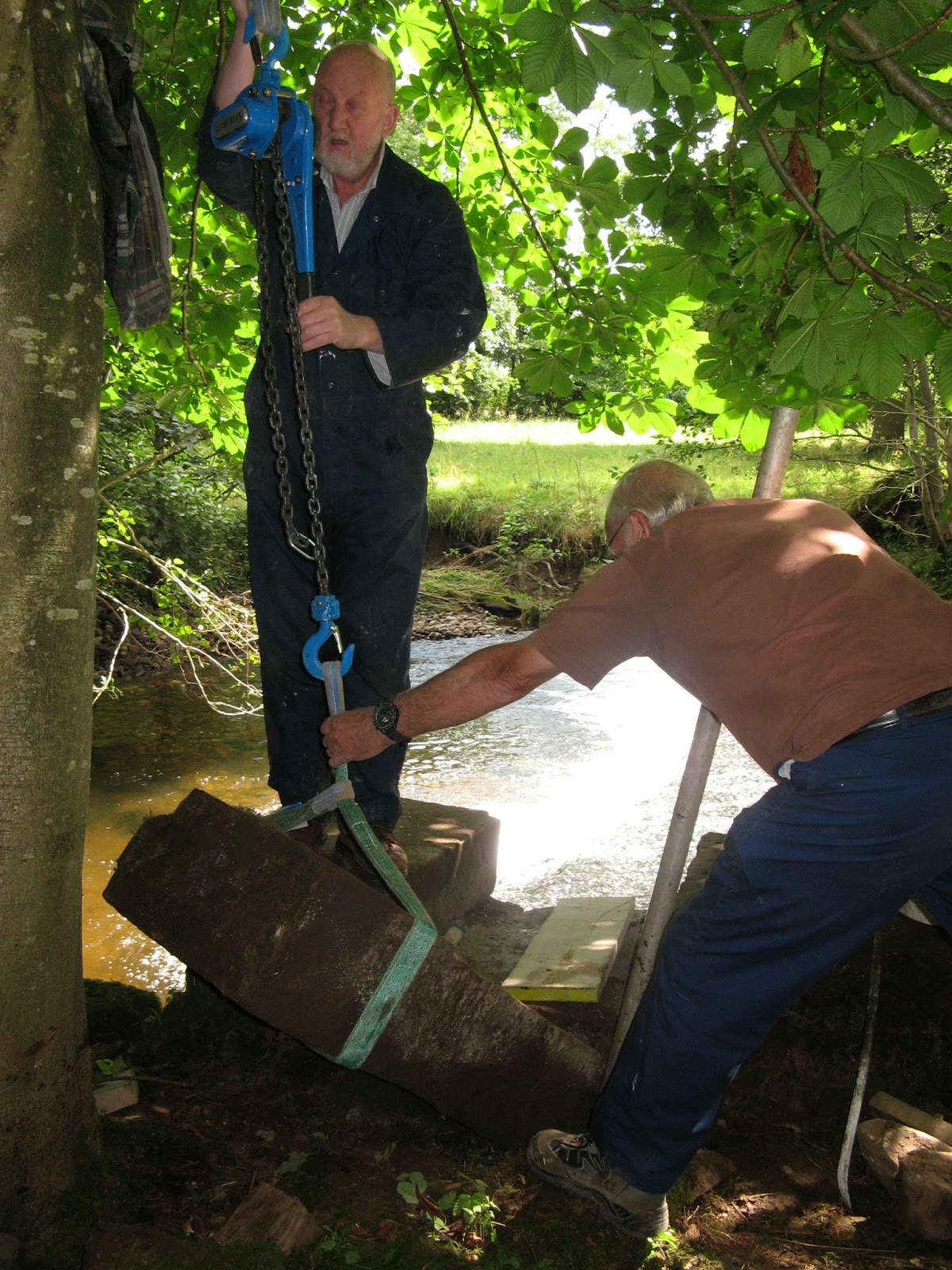