Over the past 2 Tuesdays we have pottered ahead: 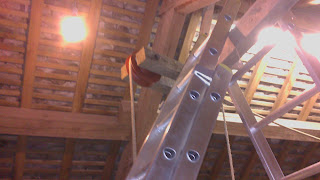 We carried on fitting the first pulley for our revised sack hoist, first filing out the casting to fit the bolt we used as axle, then mounting it between the wooden supports.  We gave a lot of thought to the lift itself, as it would be useful to be able to hoist our "Really Useful" boxes as well a sacks.  A platform, with or without sides, attached by chains which would open the trapdoor, seemed to be favourite.  We also removed the stop mechanism actuator from the old sack hoist because it was in the way.  In the process we revealed quite a lot of woodworm activity in the roof truss - fortunately only in the outer few mm. 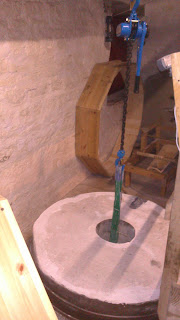 Richard carried on fitting the discs to the No 1 stone nut, and George and Mike cleared 8 barrowloads of rubble from the pit.  We fitted a bolt to the new "gate" across the front of the kiln.

Later we dismantled the tun and lifted the No 2 runner stone so we could hoover out all the grain and stuck flour.  We left the stone supported on blocks so we can lift it fully and check the bearing


On Saturday November 10th Bob and Richard, with Sylvia, attended the AGM of the National Trust to collect their Marsh Heritage Award.

The AGM itself was much more interesting than we had expected.  The big names at the helm of the Trust, particularly the Chairman Simon Jenkins, proved to be very good at fielding questions from the floor and delivering thoughtful and believable answers.

The meeting was dominated by the departure of  the Director General, Dame Fiona Reynolds.  She had obviously created a powerful impression on those she worked with, and earned deep respect and loyalty.  The tributes paid to her were very fulsome and emotional.

The time finally came for us to go up on the stage and receive our plaque and certificate from the founder and chairman of the Marsh Christian Trust, Brian Marsh, to loud applause from the large crowd of members at the meeting.

This may not be the place to discuss it, but I couldn't help feeling there is a disconnect between the lofty ideals of Simon Jenkins & co and the reality of the 67,000 volunteers who are mainly loyal to their property rather than the abstraction of the Trust.

We spent today fixing supports and hinges to the fence in the kiln room so that we could swing it out of the way to improve access.  Anything is better than having to climb the fence every time, especially for those of us with short legs.

Richard continued to file the steel discs for the shelling stone stone-nut to improve their fit on the taper.

We also removed the handle and main gear from the winnower so the handle shaft can be repaired.