Mothballing the mill for the pandemic

We hoped it wouldn't come to it, but we have been told that all volunteering activity is suspended until further notice. A number of us had turned out for a meeting with the manager, so we spent a couple of hours cleaning out  the tun, hoovering the stones and putting it all back together in a hopefully rodent-proof state. 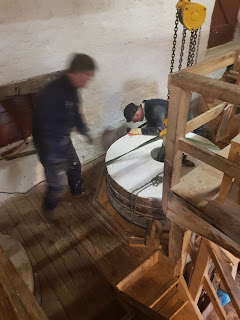 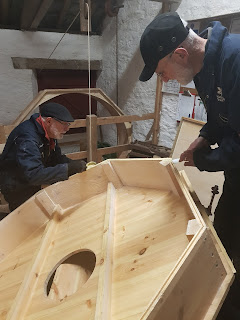 Because our stones are on a mezzanine floor, and the French burrs extend under the upper floor, we had to build the tun so that it separates around its middle - otherwise we could never lift it clear of the stones. We built it from tongue and groove boards and never thought to fill the remaining groove at the bottom of the top half. It proved an excellent hidey hole for mill moth.

So, while we had it apart, we took the opportunity to put some wood filler in in the groove.
Posted by Bob Price at 14:31 No comments:

Improving the mesh of the gears 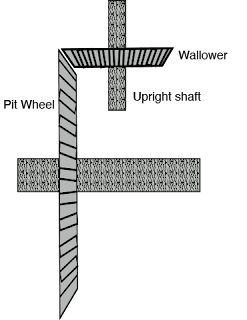 Recently, when milling, we had noticed that the machine tended to slow down once per revolution of the waterwheel and pit wheel. Initial investigation showed that this was because the pit wheel was moving into closer contact with the wallower, to the extent that the beam carrying the top end of the upright shaft was moving.
A millwright we spoke to suggested that the pit wheel, which is cast in 2 halves, might be oval due to casting shrinkage. If so, it will always have been like that, so something else must have changed.  Once we shut down for the winter, we carried out some detailed measurements. These showed that, while there was some movement, it was nowhere more than 15mm - really no more than you can expect from these castings.
We tried a range of possible solutions to improve the mesh. Re-centring the pit wheel on the main shaft proved to be very difficult - the wedges that hold it in place were put in dry and had since swollen and were very tight.  Readjusting them would be a huge job, and removing and refitting the pit wheel was ruled out for the same reason.
We then tried to tilt the pit wheel slightly on the shaft. Our measurements had shown that there was a slight tilt as well as eccentricity. Again the tight fit made this very difficult.
Eventually we decided that the simplest solution would be to raise the wallower by a few millimetres. We achieved this by lifting the whole upright shaft out of its bearing and inserting a steel plate under the bearing before reassembly. A trial running (but not milling) under water power suggested that there had been considerable improvement.
Time will tell!
Posted by Bob Price at 12:08 No comments: