Richard and Ray decided to try to excavate a truck from the former gypsum mine.  It was lying quite well buried at the foot of a slope near the drift mine, and is lacking wheels and side panels, but the frame seems quite sturdy.  It took most of the day, but they seem to have got it out.  A working party will be needed to drag it up the slope.

Ray had made a pair of plywood reinforcements for the square hole in the lid of the Really Useful Box we collect the flour in - the lid had cracked in use.  Bob drilled and fitted the reinforcements (this required the points of the screws to be filed off).  It was agreed that nuts and bolts would not be suitable, as the nuts could fall off into the flour.

Mike was continuing to paint the walls with limewash.

Later, Mike and Bob bagged all the remaining flour, but more will be needed for the Bank Holiday weekend.
Posted by Bob Price at 17:58 No comments:

In order to mill while the river is at a rather lower level, we needed to improve the flow in the headrace and the efficiency of the wheel itself.

While Mike and George continued improving the state of the internal walls of the milling room, we had a visit from NT Business Support person, Nic Frampton.  She indicated she would like to help, so we set her to clearing the last section of the headrace.  In half an hour she shifted a lot of sludge.

Ray and Richard were working on fitting pieces of plastic pond liner inside the wheel buckets as a temporary repair, pending having the time and wood to repair it properly.  Unfortunately, we only had a limited amount left, so they had to prioritise the worst buckets.

Later Bob drove over to Little Salkeld to collect some more wheat and flour bags.
Posted by Bob Price at 23:14 No comments:

Richard and Ray used the new jack support beam to lift the inner end of the main shaft so that the bearing could be cleaned and re-greased.  The first picture shows the bearing with the top cover and most of the grease removed.

The second shows Richard adjusting the position of the jack so that the shaft lifted exactly vertically - otherwise it tended to lean on the bearing shell and stop it being moved.

Once everything was in order, the bearing shell was removed. The wear is easily visible and eventually a new one may be needed.

Meanwhile Bob siliconed under the edge trims of the bagging bench worktop (which Ray had fitted earler) and continued to put sealant on the internal corners of the grain storage bin.

Once the sealant was dry Bob took the opportunity of trying on the protective clothing so he could sieve and bag the flour we milled on 10th July.  That gives us 12 bags we can sell at the weekend. 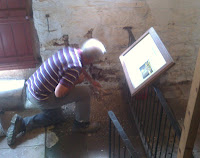 George spent the day cleaning up and re-pointing the damp walls in the public part of the mill room. he is later going to put waterproof sealant and limewash on them.

Today we had a second visit from the Environmental Health inspector from Eden District Council, who had previously approved the milling of flour for public consumption.  She met Acorn Bank custodian Sara Braithwaite, catering manager Sarah Swindells and mill volunteer Bob.

It was a very helpful meeting, and the inspector passed on a considerable amount of her knowledge and experience.  She was very pleased with the progress we had made, particularly with lining the roof, and was prepared to give us the all-clear for the bagging of flour in the mill, subject to completing the sealing of the bench (Bob had bought the metal end covers, they just need to be fitted and siliconed) and including hoovering the overhead beam in the pre-bagging checklist.
Posted by Bob Price at 22:24 No comments: